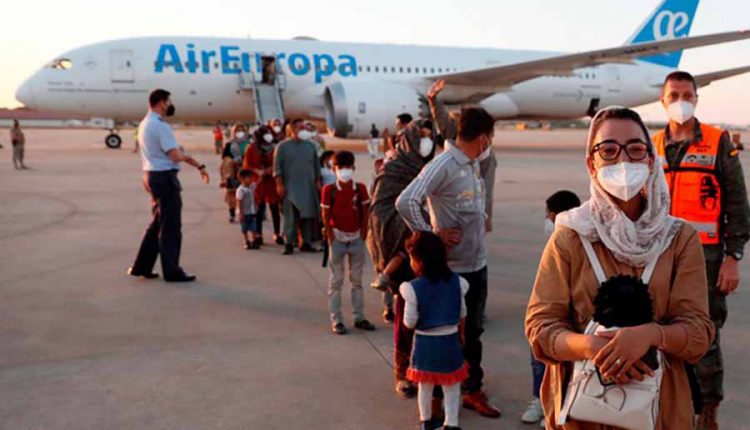 The first Afghan collaborators of the United States arrive in Rota to host the military bases.

A military plane lands at the Cadiz base with 400 civilians, who are being treated with Spanish military support, the Red Cross and volunteers.
According to sources from the US Embassy, the first 400 Afghan collaborators from the US evacuated by their troops from the Central Asian country have landed at the military base in Rota at 9.40 this Friday. It is the first contingent to land on Spanish soil after the agreement between Washington and Madrid was announced last Sunday to use the military enclaves of Rota and Morón (Seville) in the temporary reception of these citizens during their transit to third countries.

The evacuated Afghans are being cared for by US officials who are charged with receiving, processing and attending to their basic needs. In addition, the same sources report, a group of Spanish soldiers, members of the Red Cross, and volunteers from the base help them in these tasks.

The agreement between Washington and Madrid contemplates the reception of a maximum of 4,000 civilians for 14 days, the period considered sufficient to confirm the affiliation with the United States, the permits and process their final destination to the North American country or other States. In addition, medical personnel are following anticovid protocols, and each of the refugees is being evaluated for any other type of wound or injury.

Guarding a row and loaded with bundles of clothes. This shows the only image released so far by the US Navy, the arrival of the first contingent of Afghan collaborators of the US troops in that Asian country at the Roteña base. Women are attentive to children, interspersed with men who are also aware of the children. All are queuing outside a hangar, escorted by American soldiers. Until its reception is completed, the American Embassy will not facilitate the relationship of minors, women and men.

These first 400 refugees have landed on a US Air Force C-17 Globemaster III aircraft that had departed from Kuwait International Airport. Secrecy about the arrival of Afghans to US bases has been maximum. The difficulties and the danger posed by their evacuation, confirmed after the double attack on Thursday in Kabul that left dozens of deaths – including a dozen US officers – have conditioned flights and times.

The so-called Operation Allies Refuge in Spain is expected to last until the end of September. Throughout these weeks, the planes chartered by the US troops will transfer up to 4,000 Afghans to the bases in Rota and Morón, who will also progressively leave for the US or third countries. This was explained by the Junta de Andalucía, Juan Manuel Moreno, after having a telephone conversation with the Minister of Foreign Affairs, José Manuel Albares. He gave him details of the operation designed by the US State Department.

Both the civilian personnel who work for the US Army and the citizens of Rota and Morón have turned to welcome these refugees. The United States command has directed all the logistics and conditioning operations of the bases. This Thursday, the Facebook account of the ground in Rota spread images of its soldiers setting up tents, tables to eat and preparing the area for the arrival of the first collaborators. Spanish staff have contributed children’s clothing, toys and children’s furniture there. The solidarity chain has been extended to the rest of the municipality, where several religious brotherhoods have coordinated with the City Council to donate clothing and hygiene products.

What is Public Liability Insurance? A definition.

VMAs manage to get Justin Bieber to perform after 6…